As if we needed any additional conformation, one of the clear conclusions from this year’s Consumer Electronics Show (CES) in Las Vegas is that audio content and voice are going to dominate 2018. From podcasts, to Amazon Alexa, to Google Home, audio, is rapidly becoming the preferred medium in which the majority of people will consume content within 3 years. A

And it has already started, One in 4 Google searches are done by voice, because it’s much easier to say your question out loud than typing it, especially when you’re on the go.  It saves you 2 seconds, and that’s all that matters.

We are living in a world where -over everything else- TIME is what people value the most. Let me give you an example that we’re all too familiar with.  When you’re using your phone you’re used to clicking on some app, your Instagram Feed, Maps, etc.  and seeing it load instantly, within a fraction of a second, right?  Well, when for some reason your internet speeds are just slightly, slightly slower to where it takes just an extra second, just ONE EXTRA SECOND, to load, you start getting irritated.  You are aggravated because it took one second longer than you expected to connect to a satellite in space. Think about that!

That’s why voice is going to win. Because it saves you seconds throughout your day that you are fighting for desperately.  But just as important, voice allows you to multitask, or do several things at the same time! For real! So if it saves you just 2 seconds instead of pulling your phone out of your pocket and typing something in to just say “Hey Alexa, or Google, or Cortana, or Siri, or whatever, What’s the Capital of Zimbabwe?” then you’re going to do that instead.  And if you’re driving or cooking or have your hands dirty while you use your voice commands or call up your favorite podcast, or order products online for you without even touching a computer, now you’re saving real time!

What this means is that those who are creating audio content, like podcasts, like Alexa Briefings, and Alexa Skills, are going to be disproportionately ahead of everyone else. You may think that Alexa Skills are new but there are already more than 20,000 already created.  Savvy marketers have already realized that in the future audio world, the various search platforms are going to rank audio content and ‘audio-friendly’ apps above all else.

Did You Know…?  Ten Facts About Podcasts & Consumer Habits 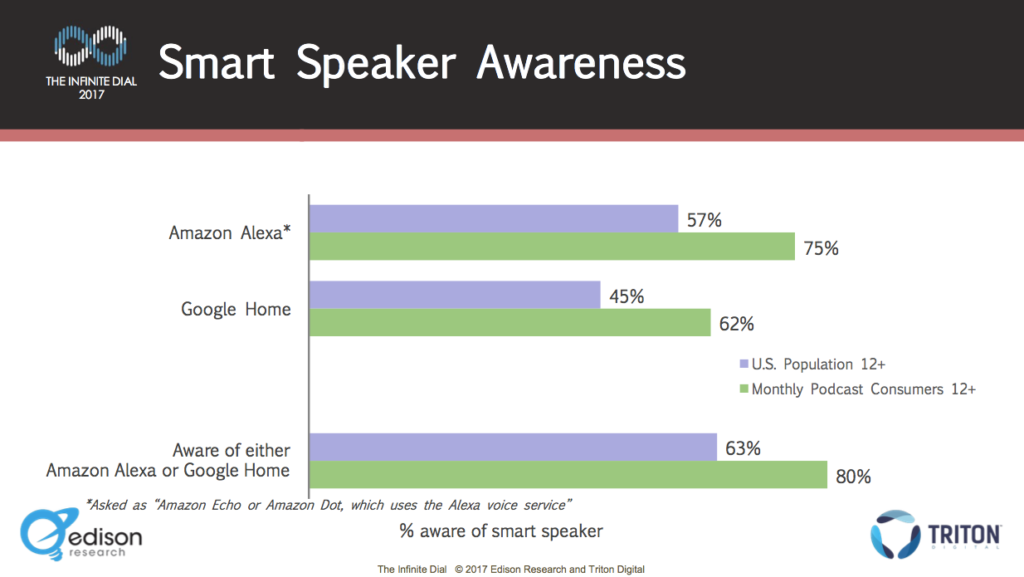 Ninety-four percent of monthly podcast consumers use social media, vs. 81% of the general U.S. population.

Every business needs to have ongoing audio content such as a podcast more than anything else. And believe me, at MGR we push video marketing A LOT, because video really connects with people and builds brands when it’s well done. But the fatal flaw of video is that it requires all of your attention and it doesn’t allow you to multi-task.  You can’t be doing something else if you’re watching something that requires you to be constantly seeing visuals.

But with audio, podcasts, it’s different. People can listen on their drive to work, while they’re walking their dogs, going for a run, shopping, cooking, lounging by the pool with their eyes closed, or any other of their favorite activities.

So the point of this explanation is this: start making audio content NOW, because it already is performing amazingly well, but also because you will be so far ahead of everyone else who three years from now, will finally realize that audio content is no longer an option, and then will become the Blockbuster Video story of tomorrow, (you know… the company that didn’t think streaming video would ever replace in-store rentals…)

Thank you for reading.  Until next week, this is Manuel Gil del Real (MGR)